In a Canadian study, prophylactic Rhesus (Rh) and Kell (K) antigen matching in MDS patients reduced the rate of alloimmunization [10]. The Dutch blood transfusion guidelines recommend performing extended Rh and Kell antigen matching in some disease groups and patient populations prior to transfusions [11]. However, in Korea, other than ABO and Rh-D antigen matching, which are done routinely, only a few institutions conduct additional RBC antigen tests.

Patients with hematologic diseases often require frequent transfusions of RBCs, fresh frozen plasma (FFP), and platelets (PLTs). These patients are more likely to experience alloimmunization due to repeated exposure to foreign RBC antigens [12]. When this happens, delayed hemolytic transfusion reactions (DHTR) may occur, and it can be difficult to find suitable blood donors.

The types of alloantibodies differ by race and ethnicity, so additional studies specific to the Korean population are needed [13]. The purpose of this study was to investigate the need for extended RBC matching in Korean patients with hematologic diseases and a history of repeated transfusions. In this study, we analyzed the characteristics of the alloimmunized group and the association between age, sex, disease type, number of transfusion episodes and transfusion volume, and the development of alloimmunization.

We reviewed the clinical and transfusion records of patients who had undergone bone marrow (BM) examinations at the Dong-A University Hospital, Busan, South Korea from January 2008 to December 2012. Data on the transfusion history and antibody identification tests performed up to June 2016 were analyzed. The total number of BM examinations performed was 1,458, and there were 910 patients, excluding duplicated patients. A total of 339 patients were excluded from the study (Fig. 1). 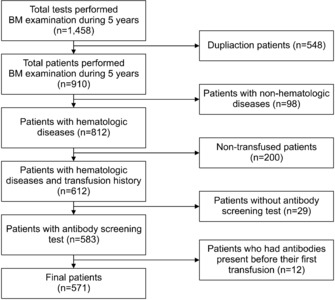 Lastly, we made a group comprising of non-alloimmunized patients who received more than 25 units of RBCs, researched its characteristics, and compared it with the other groups.

The statistical analysis was performed using MedCalc for Windows, version 12.7.0.0 (MedCalc Software, Ostend, Belgium). A two-sided -value of less than 0.05 was regarded as significant. All the results were expressed as medians with 95% confidence intervals (CI) or numbers with percentages. A Mann-Whitney U test was used for the comparison of non-normally distributed data. Chi-squared tests were used to calculate the statistical differences between groups. A Kruskal-Wallis test was also used to compare the groups. In addition, some factors associated with the incidence of alloimmunization were evaluated using multiple logistic regression analysis.

Differences in alloimmunization between disease groups 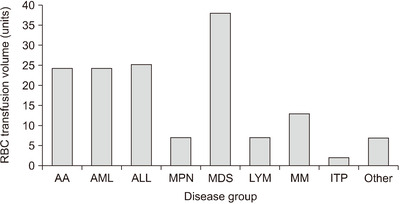 Characteristics of patients who received more than 25 units of RBCs.

The risk of RBC alloimmunization is affected by various factors, such as the relative frequency of each antigen in the population, antigenicity, and the frequency and timing of the RBC antigen exposure [14-16]. In several international studies, it has been shown that the alloimmunization rate in transfused patients was about 1∼7% [3,4]. However, in Korean studies, the alloimmunization rate has been reported to be 0.3∼1.73% [13,17-19]. Given that these rates are comparatively low, it can be inferred that the importance of alloantibodies is often not well known to medical staff in Korea. In this study, patients with hematologic diseases showed a higher rate of incidence of alloimmunization.

Some studies have reported that factors such as age and sex were associated with the incidence of al-loimmunization [6,14]. The Dutch transfusion guidelines recommend that women younger than 45 years old should receive cEK-compatible RBCs to prevent hemolytic disease in their newborns [11]. However, in this study, age and sex were not significantly different between the two groups. These discrepancies between the studies may be due to differences in race, study methods, or investigated groups. Also, in this study, non-alloimmunized patients who had received massive transfusions were younger than the patients in the other groups. Although this was not a prospective study, the results suggest that age may be related to alloimmunization. Gender was not associated with alloimmunization in this study. However, further studies using a larger patient population may be needed.

Some limitations of this study are as follows: First, this was a retrospective study and hence the relevance of the factors associated with alloimmunization has not been clearly demonstrated. Also, there were only 18 subjects in the alloimmunized group. In the comparison between disease groups, there were only 0∼6 alloimmunized patients in each group. Therefore, further prospective studies with larger sample sizes will be needed to clarify the relationships between alloimmunization and various factors.

In conclusion, extended RBC matching for the Rh subgroup may help to reduce the alloimmunization risk in patients with hematologic diseases. In addition, patients who expect to receive repeated transfusions will benefit from extended RBC matching. Age and the type of the disease are important risk factors for alloimmunization. Some unexpected findings in this study should be further evaluated and considered for a cost-effective analysis. Further studies involving larger patient populations should be performed to evaluate in detail the various factors associated with the development of alloimmunization.